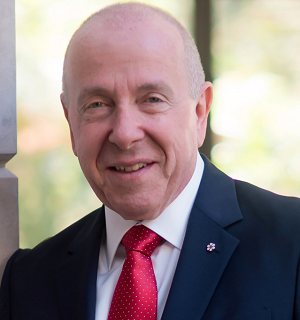 Larry Tanenbaum, O.C., Hon LLD is an accomplished operating executive and private equity investor with a distinguished record of public service to a variety of organizations. In 2007, he was recognized for his philanthropy, business and volunteerism by being appointed an Officer of the Order of Canada, the Country’s highest civilian honour.  He was inducted into the Ontario Road Builders’ Hall of Fame in 2013 and received the Toronto Board of Trade’s 2015 Region Builders Award.  In September, 2020 he was awarded the Sports Business Journal Lifetime Achievement Award.

He is Chairman of Maple Leaf Sports and Entertainment, Governor of the NHL, NBA and MLS, and chairs the NBA Board of Governors. He also serves as a member of the Board and Executive Committee of the Hockey Hall of Fame.

His private capital investments include Coca-Cola Canada Bottling and Kilmer Forestry (operating as Chaleur Sawmills and Fornabu Lumber). Kilmer has been a partner in, and developer of, such high-profile projects as the ONroute Highway Service Centres, Brightwater in Port Credit, the Pan Am Athletes’ Village, and the Province’s West Don Lands rental housing program.

Mr. Tanenbaum is a true difference maker and is philanthropically committed to medical research, brain science and healthy communities.  Among his many volunteer roles, he is Co-Founder and Board Member, Tanenbaum Open Science Institute at Montreal Neurological Institute, Chairman of the Research Board for the Lunenfeld-Tanenbaum Research Institute, and Vice-Chair, Brain Canada.