Researchers at Sinai Health have used a tiny worm to track how an animal’s brain changes throughout its lifetime, shedding new light on how human brains develop.

In new research out today in Nature, scientists from the Lunenfeld-Tanenbaum Research Institute (LTRI) at Sinai Health describe four basic patterns of how new connections are made in the brain of the nematode worm, Caenorhabditis elegans, or C. elegans.

“This is the first time that an entire brain’s structure is deduced and compared across developmental stages, from birth to adulthood,” said Dr. Mei Zhen, a senior investigator at the LTRI. “These new findings have powerful implications for the fundamental rules that allow the brain’s developmental maturation to take place.”

Zhen and her colleagues used state-of-art electron microscopes to reconstruct the full brain of eight C. elegans individuals to learn how it changes with age. Although C. elegans is a relatively simple organism, many of the molecular signals controlling its development are also found in more complex organisms, like humans. They also have a short life cycle of only two weeks, making it useful for studying their development.

“We examined every connection for every neuron and found many new connections are added as animals grow older,” said Dr. Zhen. “When we analyzed these connections like wires in a computational network, we discovered the new additions follow patterns and their collective changes serve one purpose — effective information processing.”

The first wiring map of C. elegans was generated by John White and his colleagues at MRC Cambridge more than 30 years ago, and it was a composite of partial maps from several different worms, including some at different developmental ages. 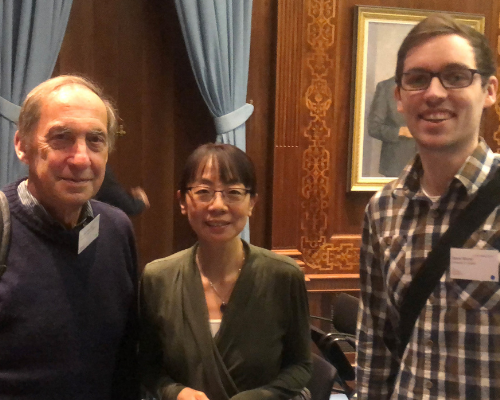 Dr. Daniel Witvliet, a former PhD student in the Zhen lab at the LTRI, led the current study, alongside scientists from Harvard’s Brain Institute, including Drs. Aravi Samuel and Jeff Lichtman.

The researchers looked at how the worm’s brain structure changed both at single synapse resolution and at the geometry level as a whole, discovering that a few structural properties in the newborn’s brain allow them to correctly predict the wiring patterns of the mature brain.

“Our research shows that different parts of the brain have different degrees of flexibility,” Dr. Zhen said. “Knowing which part of the brain has more plasticity can help scientists come up with strategies to overcome genetic vulnerabilities to diseases during the brain’s development. We are humbled by and proud to continue the legacy from our scientific pioneers.”

While identifying some key patterns of the brain’s development, researchers also discovered substantial connectivity differences that make each brain unique.

Dr. Zhen said they noticed consistent wiring changes between different neurons, where each change altered the strength of existing connections and in turn created new connections, ultimately altering how information was being processed. Over the course of development, researchers found their central decision-making circuitry was maintained, where its sensory and motor pathways were substantially remodelled.

This research was funded by several organizations, including the Canadian Institutes of Health Research (CIHR), the National Institutes of Health (NIH), and Human Frontier, along with support from Sinai Health Foundation and the Radcliffe Institute for Advanced Study at Harvard University.