Meet Astir: The new AI-tool that can sort millions of cells in minutes

A new tool designed by Sinai Health researchers could one day help doctors make faster diagnoses and treatment decisions by using artificial intelligence to sort millions of cell types in the human body within minutes.

Scientists at the Lunenfeld-Tanenbaum Research Institute (LTRI) recently created Astir, a machine-learning method outlined in a new paper out today in the journal Cell Systems. Dr. Kieran Campbell, an investigator at the LTRI, said they used data from recently developed experimental methods to measure the protein content and location of a single cell in rapid time. 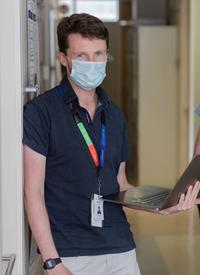 “Each cell type is defined by the expression of specific proteins, but labelling each cell with a specific cell type based on the expression of its proteins is often challenging and subjective,” said Campbell. “That’s why we created Astir. It takes the guess work out of this critical process and it can do it in seconds.”

Humans are complex organisms made up of trillions of cells, each with their own structure and function. During illness or disease, it’s up to doctors and scientists to figure out what part of the body or group of cells is not performing as it should. In the case of cancer, differences in the cell type composition play a critical role in both diagnosis and the effectiveness of treatment.

“One of the ways that Astir can be used is to perform automated quantification of cell types present in a patient’s tumour,” Campbell said. “Not only can it be used to form a diagnosis, but Astir could also help determine optimal treatment regimens for patients.”

Campbell said he hopes Astir will one day be used to assign cell types to patient samples in an automated fashion, ultimately allowing doctors to use the information as biomarkers to determine the optimal treatment for each patient in a truly personalized manner.

Astir is available publicly online, along with a tutorial with example data for researchers to familiarize themselves with the new tool.

The research was funded by grants from the Canadian Institutes of Health Research (CIHR), the Princess Margaret Cancer Foundation, NSERC, the Canada Research Chairs Program and the Canadian Foundation for Innovation.