Study yields insights into synaptic changes in learning and memory

Researchers in Toronto have shown how the strengthening of some neuronal connections in the brain involves the transient expression of a particular protein, which could lead to a better understanding of learning, memory and neurodegenerative diseases.

The researchers showed that in the hippocampus of rodents, the strengthening of those connections among neurons — known as synaptic plasticity or long-term potentiation — unfolds through at least two distinct processes. 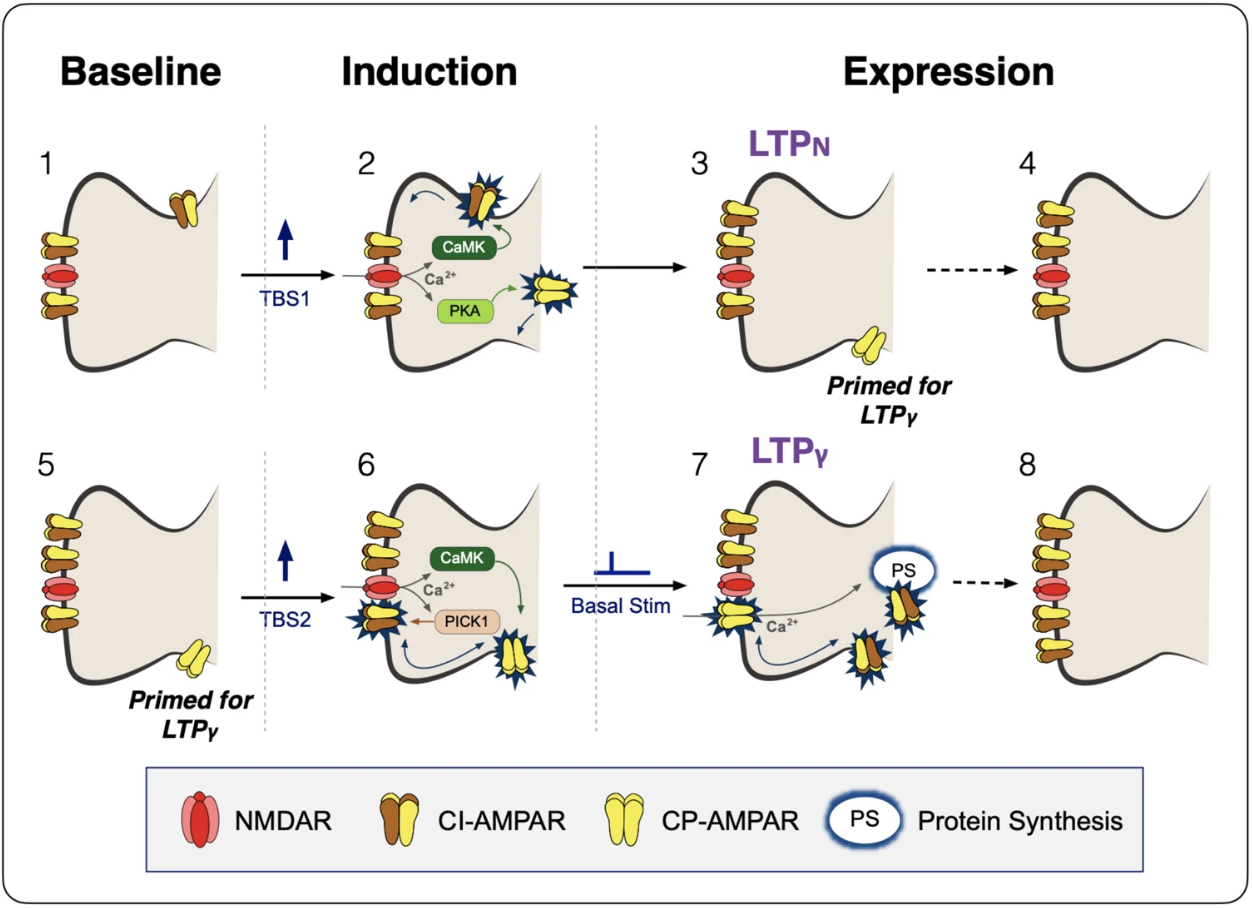 HOW CP-AMPARS (YELLOW SYMBOLS) CAN BE TRANSIENTLY INSERTED INTO THE SYNAPSE TO PROMOTE LEARNING. THIS PROCESS CAN BE FACILITATED BY ACUTE STRESS, BUT IF CHRONICALLY ACTIVATED CAN LEAD TO THE DEATH OF SYNAPSES.

Both processes require proteins known as AMPA receptors, but while one relies on an increase in the number of those proteins, the other process depends on a greater conductance of electrical signals in individual proteins through insertion of calcium permeable or CP-AMPA receptors, the researchers showed.

“It is now firmly established that synaptic plasticity supports information storage in our brains but also that errors in this highly complex process underly major neurodegenerative conditions such as Alzheimer’s disease,” said Graham Collingridge, senior investigator at the Lunenfeld-Tanenbaum Research Institute and Director of the Tanz Centre for Research in Neurodegenerative Diseases and Professor of Physiology at U of T. “This work should help shed further light on all those brain processes.”

The journal Nature Communications published the findings in January.

Earlier work by Collingridge and collaborators in the UK showed how acute stress could also trigger the synaptic insertion of CP-AMPARs. This could explain in part why we perform better under conditions of mild stress.

But excessive activation of CP-AMPARs can lead to unwelcome changes in the brain including the death of neurons. Another collaboration between Collingridge, former Tanz director Peter St George-Hyslop and colleagues showed that toxic species of oligomeric amyloid beta (a component of plaques strongly linked to Alzheimer’s disease) lead to very rapid synaptic insertion of CP-AMPARs.

“So, a picture is starting to emerge about how CP-AMPARs are important for learning and memory, how they are regulated by levels of stress and how they may also be a trigger for the synaptic changes that constitute an early event in the progression of Alzheimer’s disease,” said Collingridge. “Like all good things, it’s a question of balance.”